On the head are two antennae (feelers), a pair of point eyes and the mouthparts.

As with other insects living from bloodsucking, the mouth parts are shaped as a short tube. When the head louse needs to suck blood, this tube is pushed out and small sharp teeth at the tip of the tube act as barbs, so that the louse can cling to the skin. Through the tube, three awl-shaped sticks emerge that cut a hole in the skin of the host.

Head lice are oblong and flat insects, whose bodies are divided into three parts: Head, thorax and abdomen. The adult head lice are 0.08-1.118inch / 2-3mm long, the females being somewhat bigger than the males. The newly hatched lice are smaller than 0.04inch / 1mm. Head lice are light in colour – and their skin is almost transparent. Shortly after the head lice have sucked blood, the colour of their abdomens will be red and, as the blood is digested, it turns brownish. All head lice do, however, have some pigment in their bodies, the amount of which varies depending on the origin of the head louse.

Head lice from geographical areas, where the population has dark skin or dark hair, have more pigment than head lice from areas with a population of lighter skin and blond hair. The dark specimens are harder to detect in dark hair, and the light ones are more easily overlooked in light hair.

The thorax has three pairs of legs – each leg with a claw at the end. The legs are adapted to the head louse life amongst the numerous hairs on the human head. On the shin of the head louse there is a ‘thumb’-like extension. In interaction with the movable claw on the foot, it is adapted to be able to grip all kinds of hair – thick or thin – and regardless of the cross section of the hair being round, oval or flat.

Head lice have receptors on their legs. They are sensory organs, warning them of interruptions in the hair if, for instance, the host scratches her head or combs her hair. They enable the head lice to move quickly away from danger areas.

The abdomen is partly transparent, which makes it easy to see the intestine more or less filled with blood. The more blood in the intestine, the darker the head louse seems. The anus is situated at the back of the abdomen and close to the genitals.

The males have a rounded back end, but this may appear pointed because the penis often protrudes through the genitals. The back end of the females, on the other hand, is clearly W-shaped. 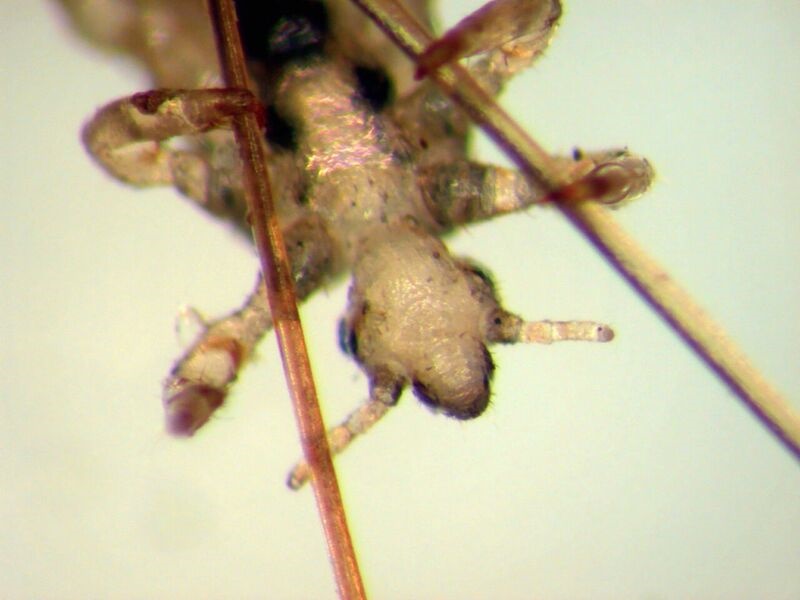 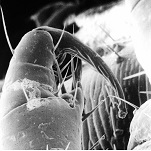 Head louse – close up of leg with receptors
© Malcolm Greenwood