Head lice (Pediculus capitis) are blood-feeding insects. They spend their entire life on the human scalp and feed exclusively on our blood.

The egg is firmly attached to a hair close to the scalp, where the climate is sufficiently warm for the louse foetus inside the egg to develop. The development takes approximately seven days and then a new little head louse is ready to crawl out of the egg.

During the first three stages of the head louse lifecycle, in which it is not yet fully grown, the head louse is called a nymph. Between each nymph stage, the head louse casts off skin and grows rapidly. Each of the stages lasts about three days, thus the louse more than doubles its volume in just 10 days.

Not until the head louse casts skin after the third nymph stage to become an adult head louse, is it possible to determine whether the head louse is a male or a female. Shortly after this final skin cast the head lice mate. Just 24 hours later, the female head lice are ready to lay eggs – and a new cycle begins. 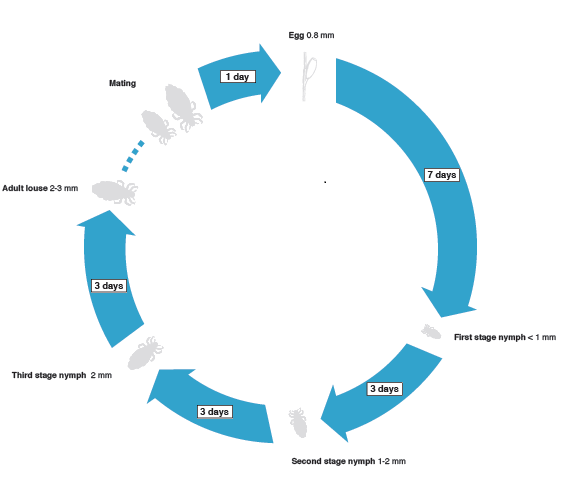